The Journal of Strength & Conditioning Research recently published a study in their October edition that addressed "The Components of the Jumps in Expert and Intermediate Water Polo Players." I take special interest in this study since I was a former water polo goalie and have worked with water polo players and teams at various levels.

What the study calls "jumps", water polo players and coaches typically refer to as a lunge, but for consistency purposes, I'll use the term jump.  Water polo players jump by using an aggressive eggbeater, breaststroke, or double breaststroke kick.  Goalies jump out of the water to make a save, defenders jump up to make a field block or jump forward to knock a shooter down, shooters jump up to shoot the ball.  Therefore, the ability for a water polo player to jump out of the water is a crucial component of the sport.

The study found a players ability to develop force, velocity and power in a very short amount of time was a major factor that separated intermediate and expert water polo players.  Ultimately, it concluded that "intermediate players need a physical preparation of resistance training aimed at developing rapid rate of force development and the maximal dynamic force and power and reducing temporal variability." (1)

Because intermediate players are not able to recruit enough motor units in such a short period of time, the study suggests training at a high intensity of 85-100% of 1 rep max in order to develop a higher force rate.  This will create neural adaptations, such as an increase of neuron excitability, motor unit firing rates, and a reduction in neuron inhibition, which in turn reduces ones temporal variability.

One thing to keep in mind that when a player jumps, there is an increase in body weight as he elevates out of the water.  Therefore, the study recommends that the use of chains be added to the collars of the barbell when squatting.  The accommodating resistance you get from the chains as you stand up from the squat simulates the increased body weight as you jump out of the water.

Personally, I am not a huge fan of chains and/or bands.  It's my experience that most polo players are not strong squatters, and initially I would work to get them stronger by just plan squatting.  Once there was a level of strength equal to 1.5 body weight in the back squat, I would then consider progressing them to the use of chains.

In leu of chains, I would highly recommend the use of the snatch and clean & jerk.  I addressed jumping and weightlifting for athletes previously, so I won't go into great detail.  The mechanics of jumping in weightlifting and jumping in water polo are undoubtedly different.  However, the ability to develop rapid force development is unquestionably better than accommodating resistance, not to mention the benefits of developing coordination and body awareness, so there is great transferability.

This study provides more evidence to why athletes, even water based athletes, should be involved in a strength & conditioning program that includes the Olympic lifts, their variations, and squats with a skilled coach who knows how to execute, coach and program them. 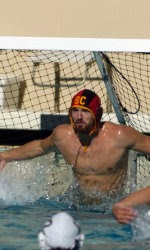